Difference between revisions of "Relay servers for public posts"

»» Note
This is a proposal, not an accepted specification.
»» Note
Discussion regarding this on Loomio. 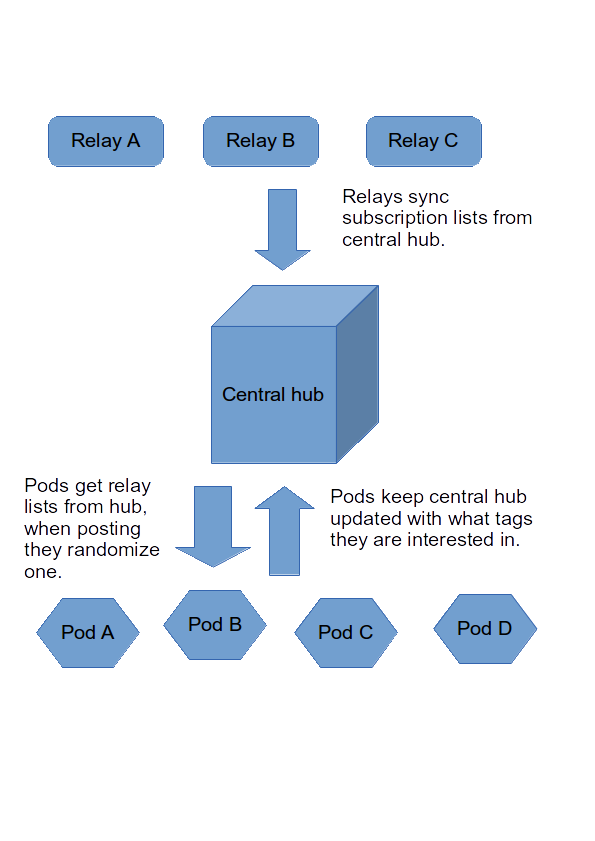 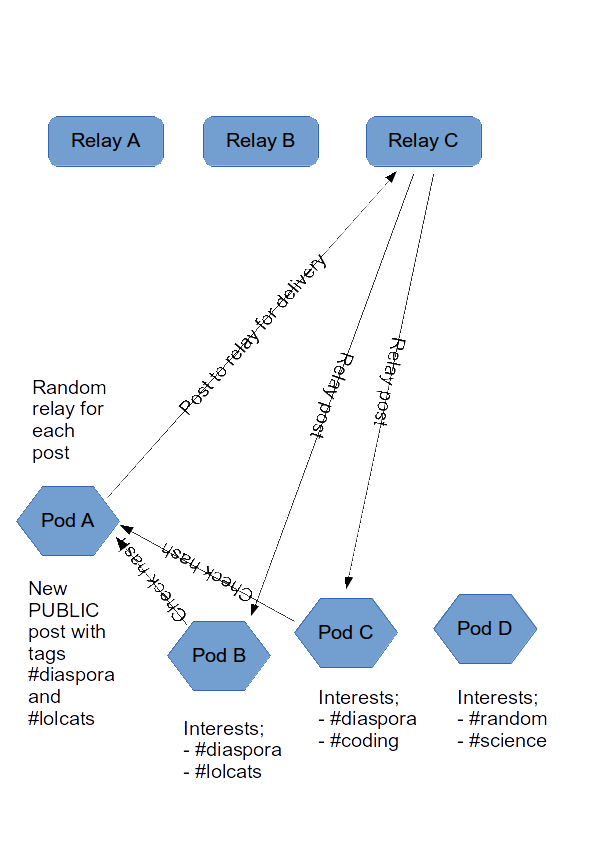 This solution is based on using the current federation protocol and manual user action from users to subscribe to tags. This solution would not require core code changes and could be used as an initial stage. This would not transparently make users receive public posts from the network, it would require each user sending out ```subscribe/unbsubscribe``` messages.

The downside of this solution vs the original one is that each relay would need to keep track of all users subscribing, instead of relays just needing to know which pods subscribe. For privacy, this solution is much worse.

In this solution, the relay server would talk like a normal diaspora* pod - in terms of federation it would look to other pods just like a normal pod. However, it doesn't need to support the whole protocol, only a subset. These parts include;

Everything else can be ignored.

The server could be built taking the current diaspora* server federation parts or using some other solution, for example Pyaspora.

Sharing of information between relay servers

Initially, one server could be good enough for POC. The relays should however also exchange information between them via the normal protocol status messages. Each relay would keep track of other relays out there and notify them of changes regarding subscribers. If a relay goes down for too long a time, it is forgotten by all the other relays.

When a user wants to subscribe to a tag, they first start sharing with a relay of choice. Then once the sharing is complete, they write mention the relay in a status message, listing which tags they would like to subscribe or unsubscribe to. This message is sent as normal to the relay server, which then notes down the changes in its db (and notifies other servers too). For the relay, it really only cares about which pod is interested in which tags - but the way to keep track of this is to work with users directly.

Only messages from users who are sharing with a relay will be delivered to relays, due to the fact how the current code works. Once the relay receives the message, it will look at its db and see which pods are interested in the message, by analysing the tags it contains. It will then deliver the message to the pods who are interested (minus the sending pod of course).

After delivery, it will delete the message. Any additional copies of it will be redelivered (for example a possible future post edit feature).